The success of international civil society organizations in attempting to raise awareness about, and find solutions for, environmental and social risks associated with global interactions

• re-shoring of economic activity by TNCs
• use of crowd-sourcing technologies to build resilience by government and civil society
• new technologies for the management of global flows of data and people, including cybersecurity and e-passports

​Synthesis, evaluation and skills opportunities
​
How perspectives vary on the severity of different risks and priorities for action

We are going to continue our study and developing our synthesis opportunities with a further study of Palm Oil. We have already used Palm Oil as our focus for transboundary pollution as well as the environmental issues linked to a shift in food production systems. To wrap up this unit, we will complete the study with an example of how Civil Society (WWF, RSPO & Good Oil) aim to successfully raise awareness about, and find solutions for the environmental and social risks assoicated with Palm Oil production.

International civil society organizations have the power to raise awareness about, and find solutions for, environmental and social risks associated with global interactions.
rspo impacts brochure 2018
Task 1 - Using the worksheet beneath and the information in the two videos above as well as the RSPO report, outline who the organisations are, how they have attempted to raise awareness, what solutions have they implemented and to what extent have they been successful.
​
Task 1 - worksheet - civil society responses to palm oil

​What is Economic Resilience? 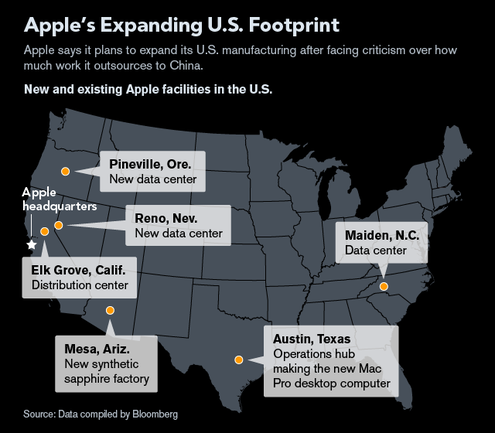 In January 2018, Apple announced plans to invest over $30 billion in capital expenditures in the U.S. over the next five years. As part of the investment, Apple is increasing its commitment to its Advanced Manufacturing Fund -- used to invest in U.S. manufacturing companies and boost the domestic manufacturing sector -- from $1 billion to $5 billion. The move is projected to create over 20,000 new jobs at Apple's existing campuses and at a new office location which has yet to be announced.
​
Apple's job creation announcement comes amid criticism aimed at the company for its outsourcing of manufacturing jobs to China, and accusations that it has dodged U.S. taxes by keeping some $250 billion overseas. A March 2017 press release from Apple claims the company supports some 4.8 million jobs in China, compared to 2.0 million in the U.S.

You can complete your note taking on either of the worksheets below.

Task 1 - Make a note of what economic resilience means.


Task 2 - Define re-shoring and explain why there is a current trend of HIC governments to carry out the process.

​
Task 4 - Use the two video above to explain why Apple are under pressure to re-shore their operations. To what extent does this aim to build economic resilience?

In France, Parlement & Citoyens is an online platform that brings together representatives and citizens to discuss policy issues and collaboratively draft legislation. At the end of the process, a conclusory report explains if, when and how citizen input was incorporated into the resulting draft law.
2. Private Sector - Crowd Sourcing - Sharing Traffic Conditions - Waze
​Waze is a community-driven GPS and navigational app that guides drivers through the shortest route possible while driving. It works on a smartphone and can helps users to find directions and avoid traffic jams. It provides real-time directions that are adjusted on-the-fly to account for various types of potential obstacles e.g. accident, broken down vehicle, police radar etc.
3. Social Media - Crowd Sourcing - Crisis Management - Facebook and Crisis Response.
People are able to mark themselves as safe. They are able to give or find help and connect directly with other people nearby to give or find help with resources like food, supplies or shelter. Users are able to raise money and support those affected by crises by fundraising or donating. Users can get information and stay updated with relevant information about a crisis from a variety of sources.
4. Reddit & The Hedge Funds

The latest twist in a battle that has pitted amateur investors against Wall Street giants. Major hedge funds had bet billions of dollars that GameStop's shares would fall. But they have faced major losses after amateurs, swapping tips on social media sites like Reddit, drove up the share price by more than 700% in one week! Find out more here.
Task - Choose case study 1, 2 and either 3 or 4 above.  Take detailed notes on the ways in which crowd sourcing can be used to build resilience and has the possibility of creating power at both the local and global scale.

Tips:
Define resilience and link to three of the scenarios above

Define crowd sourcing and outline how technology empowers and connects people around the world.

Outline who the powers are from local to global scale including the key players (as outlined above).
​
Are there any downsides to crowd sourcing? - check out this video for one example.

Watch the first video below:

1. Explain what constitutes a cyber attack.

2. Outline the main two types of cyber attack and how they work.

3. What are the results of cyber attacks

Watch the second video below:

4. Outline what happened to the Norwegian aluminium producers and why they were targeted.
​
Part 2 - Passports

5. Watch the first video and make notes on how and why passports are forged.

​6. Watch the second video and take notes on how the new biometric passports aim to combat the issues highlighted in the first video.
Task - Create a summary of how new technologies for the management of global flows of data (cyber security) and people e-passports) have the power to influence those processes involved.